Three to Royal Flush in Jacks or Better 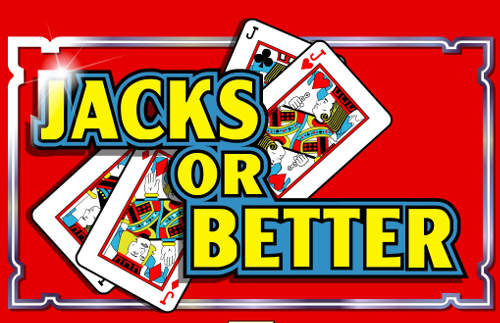 The most important key to video poker strategy is that Jacks or Better is literally the name of the game. When you are dealt a pair of face cards, you should lean heavily toward keeping it— it guarantees you get at least your original bet back, and it gives you a chance at winning more if you luck into hands as good as 4 of a Kind, which pays out 25 times your bet. Because of this, you should hold any Jacks or better pair over the vast majority of draws, needing a 4 to a Straight Flush or Royal Flush for you to be getting the right odds to throw it away. This is very different from small pairs where it’s better to hold flush draws, open-ended straight draws and even 3 to a Royal Flush than to hold the pair. Take a look at the EV difference below between drawing to a three to a straight flush versus keeping the pair (found using our Jacks or Better video poker trainer). 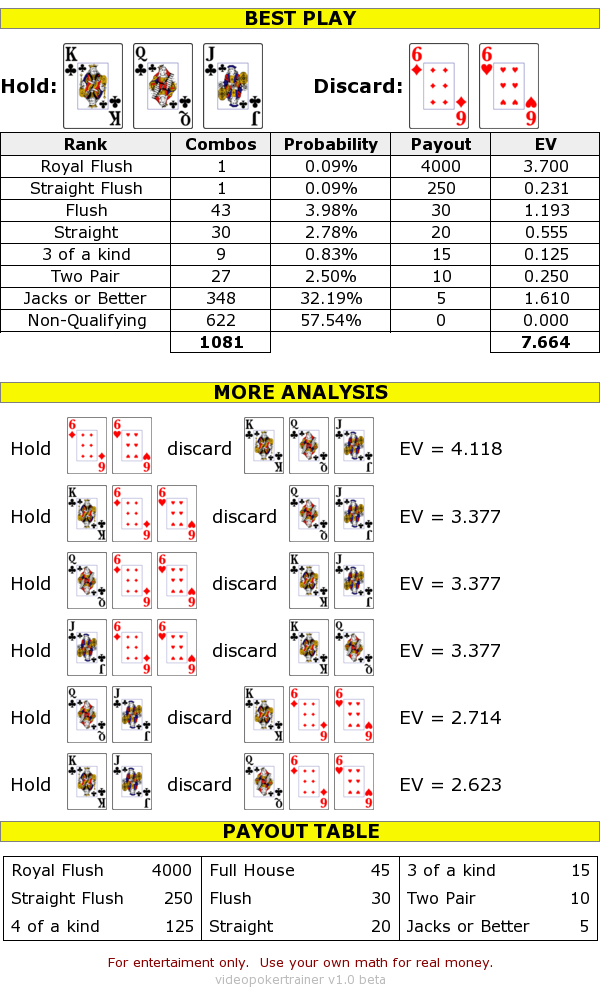 All of that may seem straight forward enough, but the strategy that throws people off the most is realizing how valuable 4 to a Royal Flush is. Since there is only one card that will complete your draw, people tend to think that it is a “fishy” play to go after it. In actuality, the payoff is so huge, that you should hold 4 cards to a Royal flush over almost anything—even over a made flush! The only exception is you should hold a K-9 made straight flush instead of discarding the 9. Check for yourself on the video poker trainer.

Even long shots are often worth it; for example, you should hold 3 to a Royal Flush over a lot of things, including smaller pairs and any flush or straight draws. 2 to a Royal Flush is nothing to get excited about, but it is still one of the best of the junk hands — junk hands being anything worse than a small pair, flush draw and open-ended straight draw.

Finally, the one thing that might throw people off who are used to playing various poker games is that this is a rare card game where an ace is actually the worst face card. Remember that you get paid the same for a pair of aces as you do for a pair of jacks and Aces Up gets paid out exactly as much as any other two pair, so it’s not any more valuable. And it’s actually worse off because it creates the fewest amount of straights chances. For example, J-T suited is very playable and should be held over just the J or even over A-J unsuited, but A-T suited should never be played (just play the Ace). 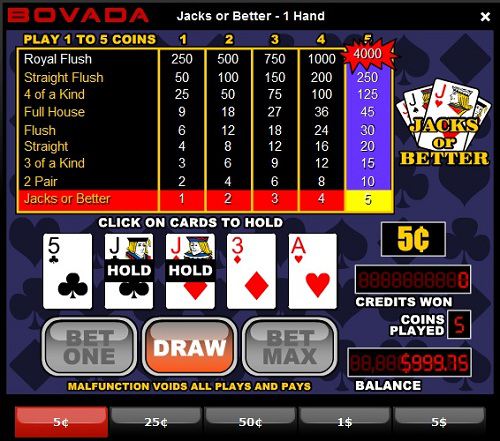 So that’s the nuts and bolts of the game. If you’re interested in getting an intensive situation-by-situation strategy guide, you can find it on FlopTurnRiver.com. Or you can enter games immediately on any number of online sites that offer Jacks or Better Video Poker!

Just as the name implies, the number one rule of Jacks or Better is that any pair of Jacks, Queens, Kings or Aces is a winner, getting you your initial bet back. From there, you win progressively more and more as you move up the standard poker hand rankings, from doubling up for a Two Pair to getting 800 times your bet back by getting a Royal Flush! Jacks or Better is one of the best video poker games to play because when played ideally, the payouts from a quality online casino are more than 99%. That means for every dollar you put into the machine, you can expect to lose less than a penny. This is one of the smallest “edges” that the house has on any game and makes for a lot of fun while still offering that chance at a big payout.

Find the top pay tables for Jacks or Better and other variations AND earn a video poker bonus! We suggest playing at: