The rules to Aces and Eights are very simple. As with most video poker games, players are dealt five cards face up. They must decide which cards to hold (how many cards they would like to draw). After they draw, their final hand is evaluated against the casino’s paytable and they are paid accordingly.

Of course, it is important to play optimally to have the highest expected value possible. The most important thing players must do is choose the best video poker machine. Choosing a good video poker machine is all dependent on the machine’s paytable. For online casinos, videopokertrainer.org has taken most of the hassle out of searching for the right paytable.

The paytables below have been ordered according to payback percentage. The paytable at the top is a full pay game available at Ladbrokes and Classy Coin Casino. However, depending on Ladbrokes Casino’s Royal Flush jackpot, Ladbrokes’ Aces and Eights machine may be a better choice. Players looking to maximize their expected value should consider playing at casinos featuring the top two paytables. 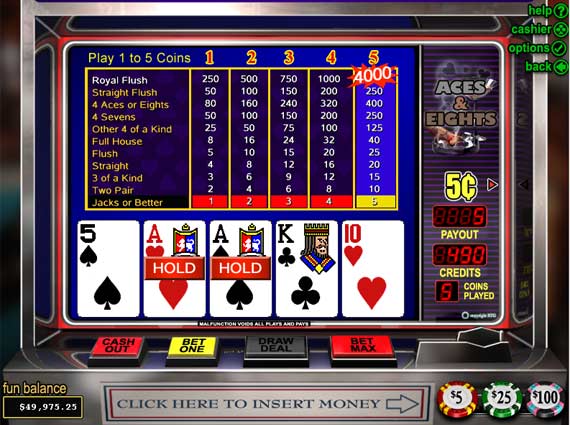 Aces and Eights is a popular video poker variant. Its name stems from the infamous “Dead Man’s Hand,” a two-pair poker hand that became famous from the legend that Wild Bill Hickock was murdered holding this hand in a saloon confrontation in 1876. The video poker variant is similar to most basic video poker games.

The most important thing when playing Aces and Eights is having fun. Luckily, any casinos that feature the paytables above have a ton of other games to keep any gambler busy. Good luck at the video poker machine!