Experienced players know that Double Bonus Poker offers all the fun and excitement of traditional Jacks or Better video poker, with even more rewarding payouts.

Double Bonus Poker shares very similar rules with the traditional form of the game. A player chooses an amount to wager and receives five cards, which he must use to make the best five-card poker holding. The player may also exchange one or more of his cards for new ones in an attempt to make the best holding possible. These rules are indeed extremely common across the video poker board, but what really sets the different variants apart is the different payout structures. Below you can see the Double Bonus Poker pay tables listed in order of best paying to worst paying. We recommend you choose casinos that have the highest payout if you want to play Double Bonus Poker.

It is called “45/10/7” because of the single coin payouts for four 5s to kings, full houses and flushes. 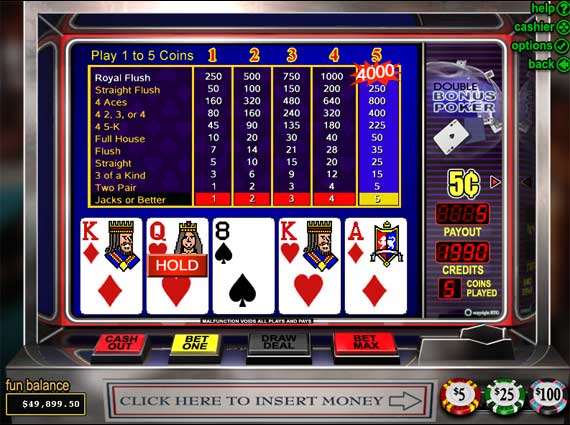 Double Bonus Poker sets itself apart from the competition by paying more on some holdings and less on others. The value of a two pair in Double Bonus Poker is, for instance, half what it would be worth in the traditional Jacks or Better. That’s about the only negative, however, with straights, flushes and even full houses all paying out slightly more than otherwise, meaning it might be advisable to take risks drawing to some big hands.

The huge selling point of Double Bonus Poker, and an explanation of why its name comes from Bonus Poker, is the massive increased payouts on 4-of-a-kind holdings. Quad 5s through Kings pay out nearly double the amount as in Jacks or Better and Quad 2s, 3s or 4s are worth more than three times as much. The most awesome feature of all, however, is the reward for hitting Quad Aces: a staggering 6.4 times the payout of making the same hand playing normal video poker.

Double Bonus Poker is one of the most fun and exciting variants of video poker because the rules and simplicity make the game easy to pick up and the payout structure certainly helps too. It doesn’t make a difference if a player has never played Video Poker before or has been playing Double Bonus Poker every day of his life, the high payouts on 4-of-a-kind holdings practically guarantee that a player is going to have a fun-filled good time while trying out his luck.