Tens or Better is a common variant of the ubiquitous video poker game, Jacks or Better. The only basic difference is that the lowest hand which qualifies for a payout is a pair of Tens instead of Jacks. Because qualifying hands come around more frequently, it’s a great way to increase the amount of fun playing video poker!

It is called “500/50/25” because of Royal Flush, Straight Flush and Four-of-a-Kind payouts respectively.

You won’t find a better online payout table for Tens or Better than this one so start playing now at Ladbrokes! 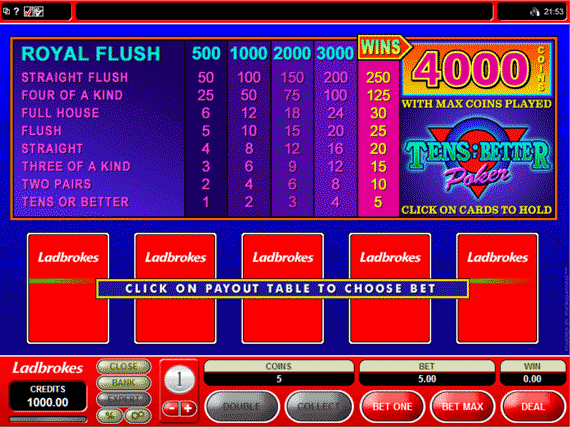 The lowest paying hand is a pair of Tens, followed by Jacks, Queens, Kings and Aces. Two Pairs are the next in rank, then Three of a Kind, Straight, Flush, Full House, Four of a Kind, Straight Flush and finally Royal Flush. In most casinos players are allowed to bet between 1 and 5 coins per hand.

Basic strategy is similar to Jacks and Better. Whenever you’re dealt a pair Tens or better, you should usually keep it since you’re already guaranteed to at least win back your bet. You should keep the pair over drawing to flushes and straights, unless you have a Straight or Royal Flush draw. Pairs smaller than Tens are a different scenario – there are often situations where it’s better to hang onto a 3-card Straight or a Flush than the small pair. You should always hang onto a 4-card Royal Flush since the payout is so huge, even though you’re drawing to one card! The only exception to this is when you have a K-9 straight flush, where it’s better to stand pat than to discard the 9 and go for the Royal.

Ladbrokes Casino* offers the best variation for Tens or Better!